In a previous post, I talked about why The Husband and I waited to have children and why we didn’t regret that decision. This time around I will be discussing some of my experiences as a young, married, and childless woman.

For most of my marriage, I often felt that others were more excited for The Husband and me to have kids than we were. We wanted to have kids…when we were ready, and we weren’t remotely ready for about the first four or five years of our marriage. We were poor college students. Then, as we got established with our careers we were just poor (or at least not in a place to feel comfortable bringing a child into the world).

Over the years, I’ve had the chance to make lots of observations about people’s actions and attitudes toward women who are married and don’t have children. It’s strange the things that people think that they can ask, say, or do.

For the first two or three years of our marriage, I was asked on a regular basis about when we were going to have kids. I thought about having a t-shirt made that said, “I’m not pregnant; I’m gaining weight. Thanks for noticing. I don’t know when we’ll have kids. We’re not ‘trying’ to get pregnant. It makes me uncomfortable that you keep asking about what’s going on inside my uterus. Please stop. Thank you. Have a nice day.”

It’s like people had never met a young, married woman who wasn’t completely baby crazy. Then you add the fact that we are Evangelical Christians. Getting married young and having children immediately is practically the Eleventh Commandment. Evangelicals take childbearing very seriously so when you’re young and married it’s all but required that you have a brood of children or be actively trying to build a brood.

There is an underlying assumption that if a couple doesn’t have children there must be something ‘wrong,’ and by ‘wrong’ I mean that the couple has *whisper whisper* fertility issues. There are several things about this assumption that irk me: 1) It unnecessarily creates and reinforces a dichotomy between parents and non-parents and implicitly makes being a parent the more socially acceptable position 2) It makes being childless a problem that needs to be fixed 3) It reinforces the stigma shrouding infertility and pregnancy viability issues 4) It isn’t life-giving whether the couple is having fertility issues or not. It’s as if there can be no other reason why a couple doesn’t have children.

To be really frank, the reason why a couple doesn’t have kids is no one’s business.

People don’t understand the impact of the things that they say and do:

There was the time that some random woman at church felt the need to lay hands on me and pray for God to open my womb. This really happened to me. A visitor to my church was asking me some questions about the church and its ministries. Then we ended up engaging in some small talk. I mentioned The Husband, and the woman was surprised because she thought that I was a teenager. I was actually 23 or 24 at the time and had been married for several years. She asked if we had any children. I said no. Without warning, this woman laid hands on me and started to pray. She touched my belly. She prayed to Jesus. She spoke in tongues. Right in the middle of a hallway.  I’m not making any part of this up.

That experience was actually the least troubling, humiliating, frightening, or frustrating of any “Oh you don’t have kids? I think that’s a problem” situation that I’ve been in.

When people (read: other women) relentlessly tried to recruit me into the “Mommy Club,” it often made me feel that I couldn’t really be friends with certain people because I didn’t have a kid…or that the children I did have didn’t count because they were foster kids and not my ‘own.’

The “Mommy Club” doesn’t actually exist as far as I know. I suspect that if there really is such a club, it must give its members some awesome kickbacks because some women are tireless in their recruitment efforts.

When other Christians clicked their tongues the times that I shared why we didn’t have children and that we weren’t sure if we would end up having biological kids or not because either a) we were more interested in adoption or b) we weren’t really sure if having biological kids is what God had for us, especially at that time; it caused me to feel like a heretic. There were times I felt that I was in front of the Spanish Inquisition (which no one expects) and that I had to prove the orthodoxy of my views to or risk becoming a pariah in our Christian circle.

The Spanish Inquisition: Remaining expected by no-one since September 22, 1970

When other women would show signs of pity because I didn’t have children (because of that assumed fertility issue that wasn’t there), it made me feel awkward. I felt awkward because I don’t need to be pitied for any reason. I didn’t feel bad for not having children so why should anyone else feel bad for me? I felt awkward because I didn’t want to jump up and shout, “We’re not having fertility issues!” I didn’t want to shout it because I felt that I would be throwing many other couples under the bus who have had fertility issues. There are people whom I love and respect that are part of that number. There’s no shame in it. Yet I felt like I indirectly brought shame to the topic the times I did put a finger on my nose and said, “Not it,” so that I could break the awkward tension of unasked questions. 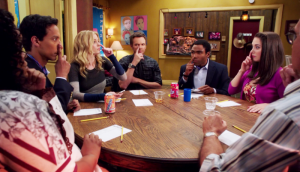 The bottom line is this: The wherefore and why of a couple’s childlessness is really no one’s business.

What childless couples need is the unconditional love and support of the people around them. What they need is for people to build them up instead of making them feel ashamed or inadequate. What they need is for everyone to keep all of their pity, judgments, and strong opinions about their childlessness to themselves. Not every aspect of people’s lives should be open for scrutiny.

I wrote this post not as a way to vent or complain or somehow bring justice/vengeance to people who have annoyed me over the years. I wrote this post for all of the young, married, and childless people out there. Have children when you want them and because YOU want them. You don’t have to justify the choice to remain childless. If you’re experiencing problems with fertility or problems getting to term in a pregnancy, know that you’re not alone. Be strong. Don’t let anyone shame you. Don’t let anyone’s bad theology or pity discourage you.