NextThere’s no crying in baseball
Television

Downton Abbey has premiered in the UK, and I’m butthurt 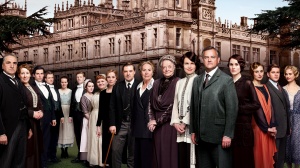 Downton Abbey has premiered in the UK, and I’m butthurt

The title pretty much says it all.

Series 5 of Downton Abbey premiered in the UK last week.  I’m butthurt because I have to wait until January to see it because I’m an American.

If you know me at all, you know that Downton Abbey is my show. I watch it pretty much every day. Seriously. I have the entire series and I watch it almost non-stop. I love Downton. I love the characters. They’re like old friends. I still laugh at the Dowager’s quips. The same events still make me sad. It transports me away to a world of fanciness where I have servants at my beckon call.

I started  watching it when I was pregnant last fall.  I was sick and slept a lot…like 15-18 hours a day. When I wasn’t sleeping, I was sick. Television was pretty much the only thing I could do that usually didn’t directly cause me to vomit.

For whatever reason, the meanie heads at Carnival and Masterpiece feel that it’s OK to discriminate against Americans by making us wait until after our friends overseas have finished the series before we even get to see the first episode. It’s completely unfair. This is Murica; the land of the free and the home of the brave. We fought a war to become free of British tyranny; yet almost 240 years later, they have found another way to make us subject to them.

I don’t even know why Americans like Downton Abbey so much. The writers/characters stay throwing shade at us. We should be offended not entertained, but British are just so flipping endearing with their manners and their posh accents that it’s hard to stay mad at them.