In what can only be described as the ultimate party poop, some guy at a University of Arizona vs. University of Nevada, Las Vegas football game decided that the crowd’s lighthearted volleying of a beach ball needed to come to an end. He also felt that he deserved applause for his efforts, even if he and his two companions were the only ones clapping.

The as-yet unidentified man interrupted what appeared to be a friendly crowd participation game when he snatched, yes, SNATCHED the ball from the air and stomped the life out of it. He then picked up the ball’s remains and threw them. If that display weren’t enough, he had the audacity to clap for himself. Who does that?

The man and woman standing next to him also applauded him. It’s unclear whether they supported his actions or if they were clapping so he didn’t feel like a lone jerk applauding his own jerkery.

It’s unclear why this man decided to poop on the party. From the video it seems like he was just being ‘That Guy.’

We all know That Guy. He’s the one that always has to be different and will do anything to stand out. He’s the guy who wears shorts in zero degree weather because ‘it’s not that cold.’ He’s the guy who makes some asinine political observation and feels the need to argue with everyone about it. He’s the guy that pops the ball when everyone else around him is having fun.

I’m sure he thought he was being funny or perhaps ironic. Perhaps he was fed up because the constant volleying was a distraction from the game.

At any rate, I’m sure his friends and family are probably rethinking inviting him out anywhere else. 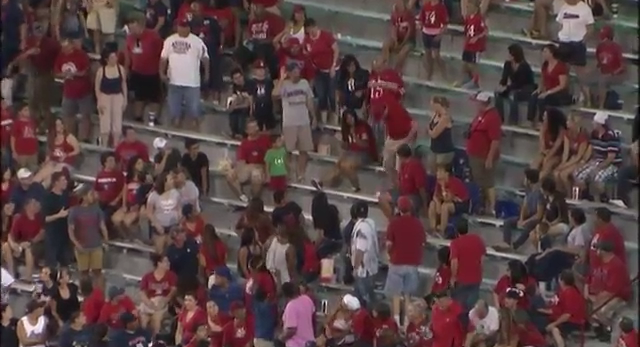