This post started as a comment in a thread about marginalized groups’ fears and concerns after the election. This post centers on race specifically and therefore only minimally, if at all, addresses the other troublesome things that Mr. Trump has said.

Several people commented that they wish they had means to share what I said, so I made this a blog post with that express purpose. I’ve edited my original comment for clarity and expanded thoughts when necessary.

Donald Trump is known for his bombastic personality, brash speech, and tell-it-like-it-is (or some people would say tactless) manner. He said many things during his first campaign that lots of people, especially those in marginalized groups, found troubling and hurtful.

Mr. Trump has been called racist, xenophobic, homophobic, a misogynist, Islamaphobic, ableist, and just about every other type of label in the book. I have been deeply troubled by some of the things that Mr. Trump has said, and I’m willing to apply these labels to his words an actions without hesitation. I don’t think it’s totally fair to apply all of these “ists” to Mr. Trump’s character, though I question if a few of them do actually apply, and I certainly hold no grudges against the people who choose to do so.

The reason why I hesitate to apply the “ists” to Mr. Trump’s character is that I would like to think the absolute best of him. I would like to say that he just runs off at the mouth. I want to think of him as a performer who is simply “putting on the dog” because the cameras are rolling and his microphone is on. I want to extend as much grace as possible to him…

The things that he has said are simply awful and make a lot of people feel hurt, angry, and/or unsafe.

When his words cross into the territory of being prejudiced or even racist, I don’t feel that I can excuse him or his words in good conscience. I don’t think we can or should normalize the ideas and language that we’ve heard from Mr. Trump during his campaign.

On this issue (racism, racist or discriminatory talk, racially insensitive comments, etc.) I have to say that while I can’t fully speak to the intent of his comments, I can’t ignore the implications of what’s being said in terms of its potential effect on others. I feel very strongly that some of the things that Mr. Trump has said puts me (an African-American woman), my loved ones, and people from other marginalized groups in danger because racism/prejudice/discrimination is so much more than hurling slurs. 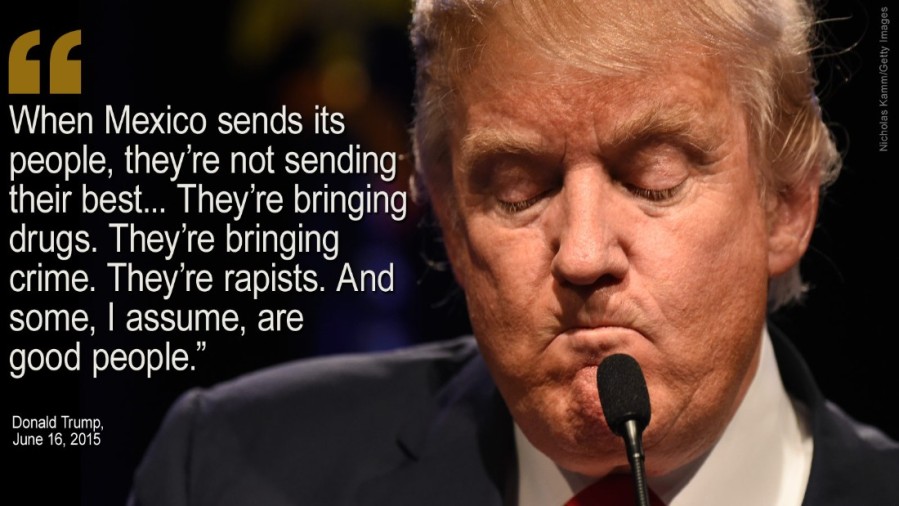 There is an entire language that people use to convey their racist/prejudiced/discriminatory ideas. This language is very familiar to those of us who are part of or adjacent to marginalized groups.

Most of the time, people are repeating things they were taught and heard throughout their lives, and they don’t even realize that there’s a problem with it. I know a lot of good people who say and do things that are questionable. There have been many times that I’ve had to tell people not to use a certain word or phrase because it was derogatory and they were mortified because they had no idea they had done something wrong.

Other times, people have very real prejudices and they give voice to those prejudices frequently under the guise of “telling the truth” or “pointing things out.” There is an awareness and intent behind their words and actions. They know the full meaning behind what they’re saying. They are fully aware and perhaps even a bit proud of their prejudices.

People in the aforementioned categories can and do act out on prejudices, but not necessarily in a violent way. It can be fully intentional or unintentional. Sometimes it’s passive aggressive. Sometimes it’s just plain annoying or hurtful.

Then there are the people who take it beyond language and microaggressions and act on those prejudices in a threatening or violent way. This is the type of person that most of us would label as racist or extremely prejudiced.

The issue is that there’s no way to know with certainty just by the language a person uses or how they speak about minorities whether they are just a little prejudiced or whether they’re going to be aggressive in some manner because there is such an overlap. They often use the same language in public (and especially in private).

I can often tell a bit about a person by how they speak to me or interact with other minorities, and getting to know a person can further reveal their heart, but even then, deep prejudice can hide behind smiles. I know this because I’ve seen it with my own eyes and have lived it in my own experience, as have many others I know.

The rapper Lil’ Jon, who was on Celebrity Apprentice, came out during the campaign and said that he and some other contestants had to explain to Mr. Trump that it wasn’t ok for Mr. Trump to refer to him as Uncle Tom, and the Mr. Trump seemed to genuinely not know why that wasn’t ok.

The problem with Mr. Trump is that  he often uses the same language as people who are prejudiced and act on those prejudices.

He’s not hurling racial slurs, but he has spoken about minorities in a manner not unlike those who do. By normalizing what Mr. Trump says, for instance talking about “the blacks” or “the African Americans” or “the Hispanics,” his position as a candidate, and now as our president, makes it ok for others to speak that way.

By normalizing such language, we not only normalize something that is offensive to minorities, but it also puts minorities in danger because it gives validity to the language and thus the ideas implicit within that language.

Dangerous people have latched on to Mr. Trump because he’s literally speaking their language. By normalizing the way Mr. Trump has spoken about women, minorities, immigrants, etc., we’re actually opening those groups up to abuse by certain elements of society because we’re removing a barrier and normalize language (and increase the potential for negative actions to ensue) that brings harm and danger to others.

We need to make sure that those intent on being harmful remain on the fringes  of society where they have less power, as opposed to putting their ideas on front street and giving place for their ideas to gain validity.

It’s not about policing free speech. Everyone has a right to say what they want. Everyone has the right to their own opinions. But, like yelling fire in a crowded stadium, there is some speech that isn’t ok. I don’t think we necessarily need to restrict such speech, but we can say that we won’t tolerate it.

We can’t tolerate it. We can’t normalize it.

I don’t always share the harassment that I receive but this was just...
I’m gonna start a revolution from my bed...