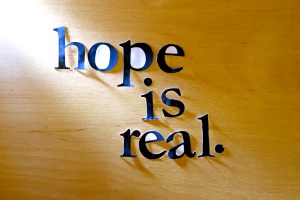 Hope deferred makes the heart sick, but a dream fulfilled is a tree of life.

Several years ago, Representative Charles Rangel (D) of New York was in some trouble and was awaiting a trial by his peers in the House. As these kind of things typically go, politics became a thing and it was starting to look like the trial wasn’t going to happen. Not having the trial could have affected his campaign for re-election. At one point, Rangel addressed the House and in his speech he said something that, at least for me, was quite poignant:

Don’t leave me swinging in the wind until November

The people who created The Bed Intruder Song made a video with Weezer that featured this quote as its chorus. At the time, there were some things in my personal life that I was hoping would come together. As it was, I rather felt like I was swinging in the wind with tons of questions and almost zero answers. As the situation began to unfold, long-held hopes and dreams felt like they were being pushed even farther into the future. It sucked.

The waiting period can be weeks, months, or even years. The heart can feel so uncertain and so insecure during that time. It can even make you feel sick to think about it. It’s easy to lose hope.

Take delight in the LORD, and he will give you your heart’s desires

Focus on the blessings that you have right now. Focus on what you do know. Trust in the character of God. As you move your focus God-ward, He will start to reveal his will for you.

God may give you exactly what you want. He may give you something better. You may come to realize that you didn’t really want the thing you had given so much attention to. Whatever the outcome, you can’t go wrong with turning your gaze to God.