It’s gettin realer denamug up in these skies, y’all. In the past week or so, there have been three stories of airplane passengers getting into fights because somebody reclined their seat and the other person had a problem with it.

As a person with long femurs (thigh bone) I feel the figurative and literal pain of those who were being reclined on.  It sucks when your knees are already grazing the back of the seat and the person sitting in front of you reclines all the way the heck back with reckless abandon and utter disregard for your personal space and the well-being of your knee caps. 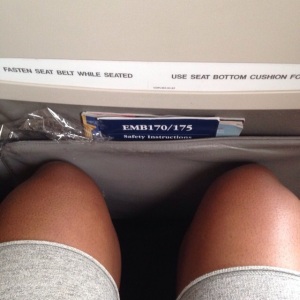 My knees grazing the seat in front of me before take off. Whoever was sitting up there had the audacity to recline, too.

It’s like some people think they’re the only person on the entire plane and that they have an inalienable right to recline their seat all the way back. I understand. You had to mortgage your house just to afford a ticket in coach (it aggravates me that plane tickets are so blasted expensive). You paid for that reclining seat and bless Heaven you’re going to get your money’s worth. But does it have to be at the expense of somebody else’s knees?

The real problem here is that flying is no longer a luxury mode of transportation. The amenities that we knew pre-9/11, like leg room and in-flight meals, aren’t available for most flights. I have a cousin who works for a major airline and he explained it (more or less) this way: We’re paying for what we use. No more; no less. The airlines were losing money offering different services that weren’t fully being utilized, so they nixed pretty much everything they could in order to keep making money.

After a series of events that all but gutted the commercial airlines, the industry realized that pretty much the only way to recoup their losses (and I assume secure the industry’s future) was to stuff the airplanes as full as they possibly could with paying customers. What resulted is smaller planes, less legroom, and no comfort.

I can’t be mad at the airlines for doing what they needed to do in order to stay alive, but flying sucks. Like it really sucks. The airlines aren’t doing jack about it because they’re making that dolla.

In each of these incidents, the core problem was that neither party had consideration for the other person. The people being reclined upon were just as much at fault as those doing the reclining.

I think it’s unreasonable to demand that someone in front of you not recline at all. Instead, we should all make the extra effort and be polite when someone is leaning just a little too far back for our comfort.

When reclining, people shouldn’t act like they’re in their favorite chair at home and exercise a bit of moderation. I understand that you paid to be able to recline, but the person in front of you also paid for use of their tray table and what little leg room there is.

It’s bunk that the airline industry treats its customers the way that they do, but there’s pretty much nothing that we can do about that (the airlines know it and it’s why they continue to keep on keepin’ on). What we can fix is how we treat one another.