Dear Dr. Carson: I can’t “move beyond” my skin and hair 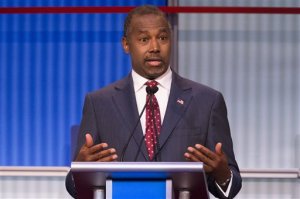 I was rooting for you in the GOP debate. I was annoyed with the first question they asked you (though you answered it better than I had expected). I was indignant when minutes had passed and you hadn’t had the opportunity to speak. I liked your idea of a proportional tax (Though I cringed a little when you likened it to tithing). I was chomping at the bit for them to give you a civil rights type of question because I just knew that you would knock it out of the park.

When they gave you the question about the race relations, I thought, “Here’s our moment. Come through, Dr. Ben.”

As a black woman, I feel that I have no voice within this party for my issues and the issues of my community. Instead, I’m told what’s wrong with my community (and me by extension). I hear/read statements by those who claim to represent the Republican Rarty about the black community that are at best tone deaf and are often racially and culturally insensitive. Of course, the Republican Party isn’t racist because they are the party of Lincoln hallelujah and pass the ammunition.

When Megyn Kelly asked you about race relations, I was waiting for a well thought out commentary on one of the major social issues of our day. I was waiting for you to take everyone there to college and to Sunday School. I had my funeral home fan with Dr. Martin Luther King printed on it at the ready.

Not everything that you said was wrong or off base: I agree that we do need to take care not to make every single incident between people of differing races about race. I do agree that we are all the same at the core of our beings. Those are points I wouldn’t have made, but I see where your audience needed/wanted to hear those things.

I waited with bated breath for the moment when you would say something that would get people thinking and would help them understand what’s happening in our country. Instead, you said the most asinine, tone deaf thing that could have been said:

Dr. Carson, my skin and my hair aren’t something that I need to “move beyond.” My skin and hair are part of who I am. Rather than “moving beyond” it, we need to have an honest conversation in this country as to why those things are so problematic that we have to pretend to not notice them in the first place.

Whether or not you intended to, by singling out skin and hair, you coded what you said for black people. Really, everything that you said seemed to be directed at black people. We’re often the so-called “purveyors of hatred” who bring racial issues to the forefront. We’re the ones for which skin and hair are tied to our identity.

What you said about race has given every hardheaded, “colorblind,” racially insensitive person what they need to feel like they can shout me (and other people of color) down when I bring up issues of racial equality and justice. In my work, I’ve been trying VERY hard to educate people about my culture and about why we (black people) emphasize our culture so much. What you’ve said, I feel, has set activists like me who try hard to educate the white community back.

Now you’re being held up as the ‘model Negro’ who is the template for the black view of race relations. This is extremely problematic because, as much as you want to deny it, African Americans are a distinct culture in America. We do have distinct issues as a community. Saying that we should move beyond it (which is a fancy way of saying don’t talk about it) doesn’t make those issues go away.

Perhaps you are oblivious to the stigma that comes with race issues and the problems that come with discussing them. People like me have to deal with all manner of BS as we try to bring attention to issues within the black community and when we try to educate non-blacks about race relations from our perspective. We’re shouted down. We’re accused of being divisive. Some of us (not me fortunately) are even threatened with violence.

That minute, that forum, the complexity of your views are no reason to essentially throw voters like me under the bus to get points and applause from everyone else. I was hoping for something…anything…that would indicate that you were different from everyone else in your party.

You gave me nothing to work with, Dr. Carson. This fact makes me sad.

Still deciding who to vote for,